This year the Reformed Educational Fund supported various educational institutions in the Carpathian Basin and the Scholarship Program for the Church Schools in Syria.

This year the Reformed students and teachers collected 17 million HUF (around 52 000 EUR)-worth of support for all of the above mentioned developments in the Carpathian Basin. Tibor Ábrám, Lay President of the Cistibiscan Reformed Church District and coordinator of the Fund introduced the work and projects of the Fund. 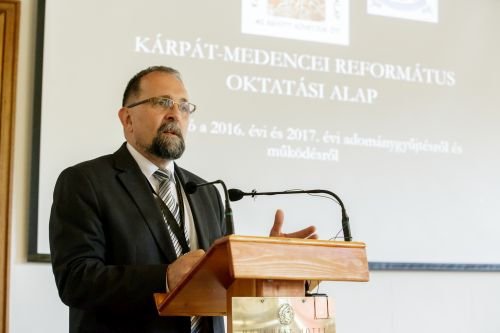 How was this fund established?

In 2009, when the Unity of the Hungarian Reformed Church was declared, the General Convent decided to consistently help the actors of the Reformed education in the Carpathian Basin. And this is how the Reformed Educational Fund of the Carpathian Basin was founded, which only support educational institutions beyond the border. Through the Fund, we can help the founding or sustaining of new Hungarian Reformed institutions.

The only exception is Syria: The support of the General Convent of the HRC for the Syrian Scholarship Program was offered from the Reformed Educational Fund this year.

Where do the funds come from?

One part of it, that we invite the Hungarian Reformed educational institutions in the Carpathian Basin to launch a fundraising campaign to support the Fund. We are not only asking for financial support from students and teachers, but also for their assistance to organise a fundraising event. Fundraising is not a common practice in Hungary. In the Lévay József Reformed High School in Miskolc, students are raising funds by selling homemade cookies on the streets to people of good will. I think fundraising is more than just collecting money. The students become more socially sensitive, they learn the process of organizing a fundraising event, the process and methods of organising, and this can be built into their life. Later, as adults, an action like this will be natural for them.

The seminary students in Budapest also planned a fundraising event for the Reformed Educational Fund of Carpathian Basin. “In the next fundraising action we would like to involve the other Seminaries as well.” – said Lay President Ábrám.

What was the amount that the previous fundraising collected?

17 million HUF was collected. Even in Subcarpathia, where people are in difficult financial situations, church members donated four hundred thousand HUF (around 1 200 EUR). The Reformed Church in Hungary supplemented this with another 11 million HUF, so that we can distribute 28 million HUF worthy of support.

What project is the current Fund supporting now?

In Marosvásárhely (Târgu Mureș, Romania), the classrooms of the Reformed elementary school can be equipped. In Nagybereg, the Lyceum can build a new sports court and in Zilah, a new Reformed high school will be built because the church still has not been able to reclaim their old school building. The city of Szabadka received support to start a new Reformed kindergarten, and in Rozsnyó, they can replace the bus of the Reformed school. In Croatia, there are no Hungarian Reformed schools, but we would be able to help the education of the children there by supporting summer camps. From the Fund, the School Year Opening of the Carpathian Basin as well as the meeting of Reformed high school and elementary school students will also be financially supported.

Based on the interview by Márk Hegedűs