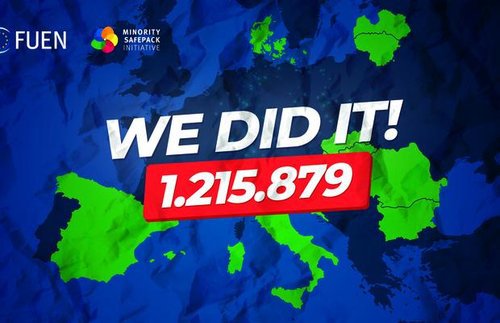 The Federal Union of European Nationalities marked the end of the Minority SafePack petition campaign with an international press conference held at the House of Minorities Office in Flensburg on Wednesday, 4 April, mere hours after the closing of the campaign.

FUEN President Loránt Vincze presented the results in numbers: the MSPI has collected 1,215,789 statements of support, 771,089 of which were signed online and 444,790 on paper. These numbers by far exceed the goal of collecting one million signatures.

“I would like to take this opportunity and thank each and every European citizen who signed the Minority SafePack Initiative. You have raised your strong voice to ask for the recognition and protection of European national minorities and language groups. You are the messengers of fifty million people belonging to a national minority community or language group within the EU” – stated Loránt Vincze, who also thanked the campaign team, local coordinators, partner organisations and friends of the MSPI, as well as endorsers of the project and members of the majority communities who supported this cause.

The national threshold has been reached in eleven countries: Romania (303,695 statements of support), Slovakia (57,890), Hungary (569,813), Latvia (8,252), Croatia (18,884), Spain (53,772), Denmark (12,194), Bulgaria (25,691), Lithuania (20,284), Slovenia (6,895), and, on the very last day of the campaign, Italy (60,545). During April, together with its local partners, FUEN will organise an official handover of the statements of support in the states where the threshold has been reached. The member states have three months to validate the statements, after which the certificates issued by them will be handed over to the European Commission, which will then have another three months to organise a public debate on the matter in the European Parliament and to express its view on the future of the initiative.

“We celebrate today the fact that over one million European citizens have supported this cause, and far more importantly, we witness the birth of a European movement for minority rights. 1,215,789 European citizens have voiced a crystal clear demand from the EU: they want to have a legislative framework for protecting minority rights. Our movement for minority protection does not aim to take anything away from Europe, or from the majority communities, but we want to make sure that our European cultural and linguistic heritage will be preserved” – said the FUEN president.

FUEN asks the European Commission to start a dialogue on the contents of a legislative framework for minorities, and also asks national governments and parliaments to facilitate the presentation and the debate on the proposals in the different states and regions.

"The success of the Minority SafePack Initiative proves that the minority communities of Europe have a strong voice, and that they are true Europeans who believe in the motto of the European Union: United in diversity" – said Hans Heinrich Hansen. The former FUEN President and Representative of the Citizens’ Committee spoke of "a day of gratitude and a day of great joy". He once again outlined the difficult path the initiative has taken to be admitted at all, by the European Commission, including the legal battle at the General Court of the European Union with the EC after they initially refused the registration of the MSPI. He called for a dialogue between minority and majority communities. In his opinion such a dialogue must always be in the foreground in order to resolve conflicts such as those between Spain and Catalonia.

"Today is a day for history, for in the history of Europe there has never been a moment when the creation of an EU level legislative framework for the protection of national minorities could have ever been so close" – said Hunor Kelemen, who joined the press conference via the internet from Cluj-Napoca / Kolozsvár, Romania. The President of the RMDSZ, the Democratic Alliance of Hungarians in Romania stressed the importance of the success of the MSPI on a local level: every fourth member of the Hungarian community in Romania has signed the statement of support for the initiative. „There were many who doubted us, who even rooted against us, who made everything in their power to stop us. But the autochthonous minorities overcame all obstacles, and proved that they are powerful communities who want European recognition and protection for their rights" – concluded Kelemen.

FUEN Vice President Gösta Toft thanked everyone in the campaign team and FUEN staff for the great performance and dedication they all delivered. Special thanks were given to Hans Heinrich Hansen, for his efforts in getting the initiative started, to Hunor Kelemen for the broad support from the Hungarian community and to FUEN President Loránt Vincze for his dedication and optimism throughout the whole process of the initiative. Commenting on the outcome of the MSPI, Toft said, "The citizens of Europe have stated a clear vote, which we now have to head and implement. We urge the EU to act!" Toft said, that the time for dialogue has started, and that there is a need for constructive dialogue and lobbying at every level in order to ensure the successful implementation of the Minority SafePack Initiative.

The Presidium of the Reformed Church in Hungary also encouraged its European partner churches to join this initiative.

This article and photo were originally published on fuen.org