Guard the Fortress! was the motto for the celebration of the Hungarian Reformed Church Unity Day this year, held on May 20 in Oradea (Nagyvárad) in a recently renovated fortress. Thousands of people from the Carpathian Basin took part in the event and the pastors spoke about how the survival of the Hungarian Reformed Community is dependent on guarding the castle as the Word of God, the Truth of Christ.

On the 500th anniversary of the Reformation, and 450th Jubilee of the foundation of the Hungarian-speaking Reformed Church, a large outdoor festival was held in Oradea (Nagyvárad), Romania, on Saturday, 20 May 2017.

The festival was hosted and organized by the Reformed Church in Romania, Királyhágómellék District, and it was the central Reformation Jubilee event of the General Convent of the Hungarian Reformed Church, the representative and consulting body of the Reformed churches in the Carpathian Basin, with 2.5 million members of 7 Reformed churches in 7 different countries. There were over 8,000 participants, including the ten Hungarian Reformed bishops of the region. In addition, hundreds of pastors and chief elders, group and individual delegations from throughout the Carpathian Basin, and many hundreds of representatives from women’s alliances, boards of elders, students, youth groups, and children attended the festival. A large number of local Reformed and non-Reformed people also participated.

The main theme of the event was: “Guard the fortress…” (Nahum 2:1). Besides direct and indirect references to the Reformation, the main theme suggested responsibility in faith and tradition, willingness to keep identity, and readiness to serve in an intercultural and ecumenical context, amidst the challenges of modern times. 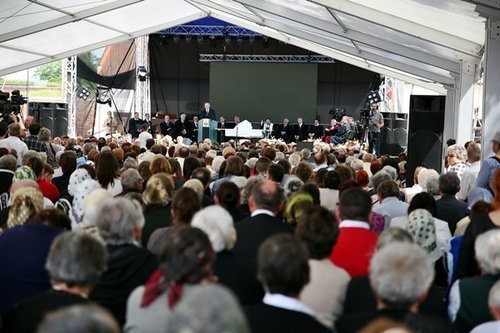 The multi-faith and multi-ethnic location of Oradea (Nagyvárad) is situated in the geographic centre of the Hungarian-speaking Reformed churches in the Carpathian Basin. The actual venue was the renewed fortress of the town, which bears historical significance for the East-European Reformation: the Hungarian translation of the Bible was printed inside that fortress, in 1660.

The festive opening started at 11 a.m. and was followed by the open air thanksgiving worship with communion. As host of the event, Bishop István Csűry greeted the gathering and reminded participants to be thankful and active in their faith. 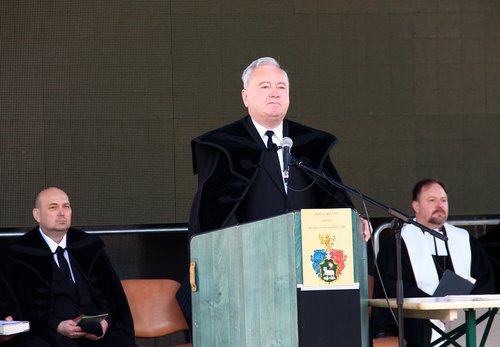 Árpád Potápi, Secretary of State for Hungarians beyond the borders of Hungary, emphasized the role of religious freedom and democracy. The religious, political and social significance of the Reformation was emphasized by Victor Opaschi, Romanian Secretary of Religion.

Church President Dr. Christoph Weber-Bern, representing the Swiss Protestant Churches, recalled the good examples of the longstanding Hungarian-Swiss relationships and said that, amid current challenges throughout our continent, European Calvinists need to reaffirm the most important message of the Reformation: Soli Deo Gloria!

Global Mission Secretary, Rev. Uel Marrs brought greetings from the Presbyterian Church in Ireland. He asked God to enable each one of us to be faithful in guarding and keeping to those principles upon which the Reformation was founded: Scripture alone, Faith alone, Grace alone, Christ alone, and to the Glory of God alone.

Presiding Bishop of the Reformed Church in Hungary, Rev. István Szabó preached on the main theme. Bishop Szabó pointed out the truth, which is that unless the Lord builds the house, the builders labor in vain; likewise, unless the Lord guards the fortress, the guards watch in vain. Ordained participants then administered the Lord’s Supper from 25 outdoor communion tables.

Participants gained an insight to the work of the living church by visiting almost one hundred stands inside the fortress, where various mission initiatives of the Hungarian Reformed churches throughout the Carpathian Basin were introduced. The festival addressed all age groups on three stages simultaneously, with children’s folk dance performances, youth music bands, and symphonic concerts. Simultaneous programs also included conferences, podium discussions, mini-lectures, exhibitions, and activities for children. 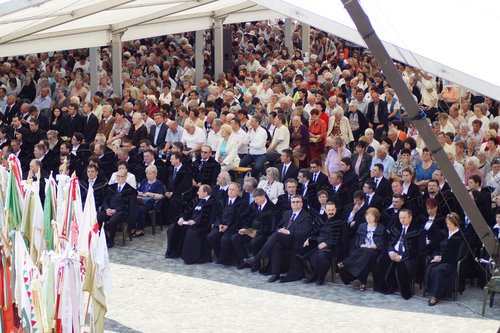