The Reformed Songs Festival celebrated their 15th annual concert on 7 July 2018. Hundreds joined in song as the choirs performed at the largest musical celebration of the Hungarian Reformed Church. 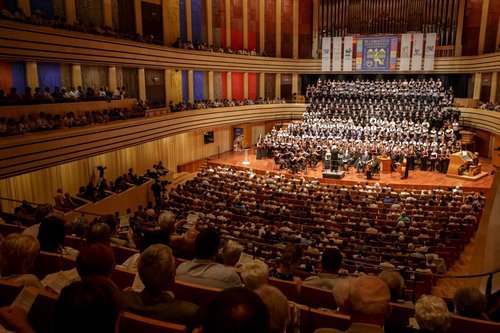 This year marked the 15th annual celebration of the Reformed Songs Festival, or the Calvinist Hymns concert, since the opening in 2002. On 7 July 2018, hundreds gathered at the Béla Bartók National Concert Hall to join in the largest musical celebration of the Hungarian Reformed Church in the Carpathian Basin. Year by year, the event attracts more and more music lovers and guests from all over the world, in addition to Hungary’s Reformed congregations.

The event is also held to make concert recordings of psalms and choral works from Reformed hymnbooks by professional musicians, which are then made available on CD and DVD. The Carpathian Basin United Calvinist Choir, as an expression of solidarity with Hungarians living beyond the border, invites choirs from the formerly Hungarian regions of Slovakia, Ukraine, Romania and Serbia to celebrate together in song.

So far, the Carpathian Basin United Calvinist Choir has recorded and released a total of 240 Reformed hymns and choral works, and they seek to continue performing in an effort to do the same for the 512 hymns in the Reformed hymnbook.